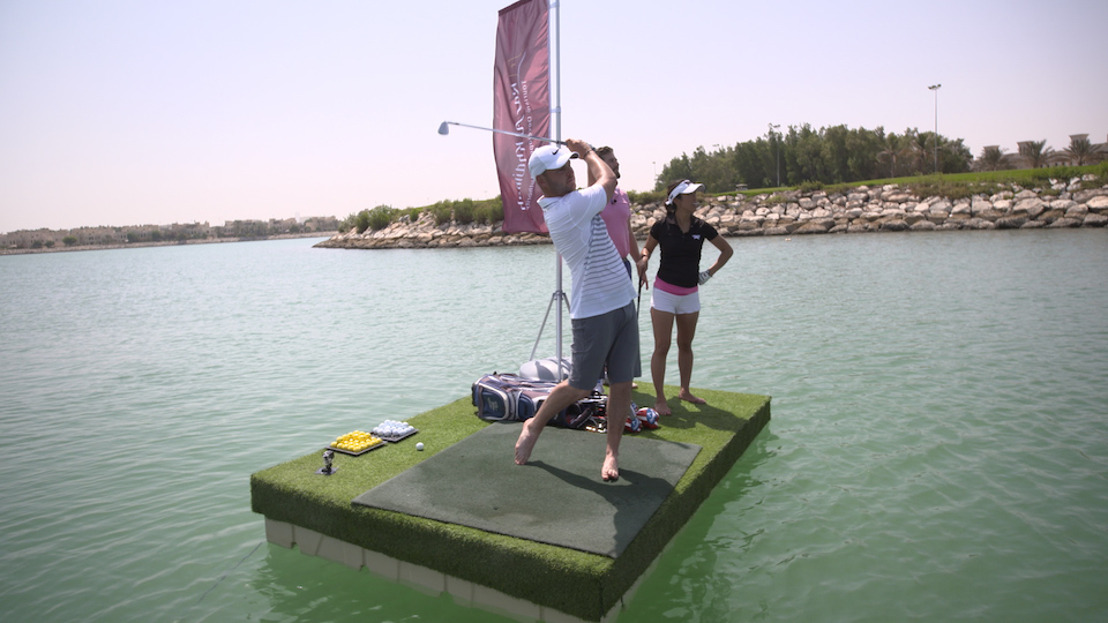 Jordan Smith, one of the brightest emerging stars in global golf, proved he is just as accomplished with a paddle as an eight-iron.

The Englishman was challenged to the unique ‘PaddleGolf’ test by Ras Al Khaimah Tourism Development Authority (RAKTDA). He was joined by with Wellness and Performance Coach Claudine Foong, and her husband, Alex Riggs, a PGA coach.

The ‘PaddleGolf’ challenge saw Smith and Foong paddleboard approximately 1,000 metres from the new Al Hamra Sailing Club through the tranquil waters of Al Hamra Marina. There, they stepped onto a floating pontoon to fire 14-yard shots towards a makeshift pin on the 18th green of Al Hamra Golf Club.

The Al Hamra Golf Club is the venue of next month’s Ras Al Khaimah Golf Challenge, which returns to the UAE’s northernmost emirate from 25-28 October.

Smith, who secured his first PGA European Tour card last October, even managed to sink one of his shots.

“I was a little cautious at first because I had never tried stand-up paddleboarding before,” Smith said. “After a few quick tips on the beach, it was a relief to get straight on to my feet once we hit the water.

“It turned out to be really fun, and it was comforting knowing the water beneath me was warm! Once we got on the pontoon, it was a little more familiar – well, as familiar as playing golf shots off a floating platform in the middle of a lagoon can be!”

Smith has secured multiple top 10 finishes and a maiden Tour win at August’s Porsche European Open. He has risen to 69th in the Official World Golf Ranking (OWGR) and currently sits in a lofty 17th in the Race to Dubai rankings. He has also secured his place in the DP World Tour Championships at Jumeirah Golf Estates from 16–19 November.

A 105-strong roster of golf stars will tee-off in the second Ras Al Khaimah Golf Challenge in six weeks. Haitham Mattar, CEO of RAKTDA, was thrilled to see Smith back in the emirate.

“It’s fantastic that Jordan has taken some time out from his busy European Tour schedule to return to Ras Al Khaimah and take part in our ‘PaddleGolf’ challenge,” Mattar said. “It’s great to have him back here with us, and on behalf of all his fans in Ras Al Khaimah, we wish him a successful end to his rookie season on the European Tour.”

The Ras Al Khaimah 2017 Golf Challenge is the penultimate event of this season’s European Challenge Tour. The event has attracted a marquee line-up of sponsors for its second edition, including Emirates Airline, the Waldorf Astoria Ras Al Khaimah, Al Hamra Group and Al Hamra Golf Club.